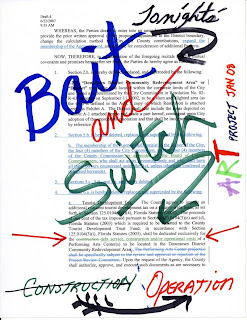 COLUMBIA, 12/4/11  (Beat Byte) --  Bait-and-switch schemes will pay off handsomely for principals of St. Charles Road Development (SCRD) in 2011, with the sale of land for a new elementary school and a new city park near Battle High.

Here's how the schemes worked.

Several competing parcels -- including the famous "Vemer tract" -- had created an explosive controversy.

District officials later found themselves on the hook for $2.9 million in infrastructure costs -- sewer, water, lights, sidewalks, streets -- some of which will serve SCRD, which has a residential subdivision planned near the new schools and proposed park.

Fast forward 4 years, when Pugh, Atkins and partners announced yet another sale to Columbia Public Schools for a new elementary school -- 32 acres in the same area, but this time for $1.5 million, or about $50,000/acre.

Though the first land sale came at a discount, subsequent land sales drove up the average price to $21,000/acre for 141 acres.

Too bad district officials didn't demand discounts across the board, especially given the bulk quantity of land purchased.