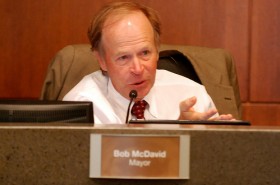 COLUMBIA, Mo 8/14/13 (Beat Byte) -- Columbia Mayor Bob McDavid has reversed himself on a tax increase to boost the number of police officers, he posted early this morning on Facebook.

"Based on comments made by the Columbia Police Officers Association (CPOA), I no longer support an increase in property tax to fund an increase in police staffing," McDavid wrote, with no further explanation.

At the forum, CPOA director Dale Roberts and a panel of current and retired police officers told a crowded audience City Hall already has the money to hire more officers, no tax increase required.

Roberts also worried that the tax increase vote could become an unfair referendum on the police department.  City leaders might take a defeat to mean voters don't want more officers.

Much of the discussion, however, revolved around the idea City Hall already has enough money to hire as many as 36 more officers.  And based on overwhelming public support on surveys, it should have done so long ago.

Roberts passed around a flier that cited a promise made to voters in January.  City government would hire more police officers using the roughly $2.2 million it would save after voters approved the 911 tax and Boone County took over the 911 center, formerly operated by the city.

Other monies that could be used include a $1.9 million budget surplus from cutting waste in city departments; and a nearly $1.7 million savings from cutting police overtime pay once more officers are hired.

On hearing this news, one audience member insisted on "passing a motion right now that we, as citizens, demand to know where that savings went.  We need to ask where that money went."   The motion passed resoundingly, as nearly everyone in the audience raised their hands.

Hosted by CPOA at the Stoney Creek Inn, the forum became heated at times, especially when the discussion turned to police and community relations with Columbia city manager Mike Matthes and police chief Ken Burton.

Neither man appears to be well-respected by rank-and-file officers.   "They don't listen to us," Roberts said.  "They never listen to us."

In the audience, retired Boone County Sheriff captain Kevin Merritt took the floor, insisting that Matthes and Burton were not "letting police officers do their jobs.  It doesn't matter how many more officers you get or how high you make taxes, if you can't do your job, it won't help."

After a round of applause, Merritt said he would happily offer specifics after the meeting to anyone who wanted to listen.