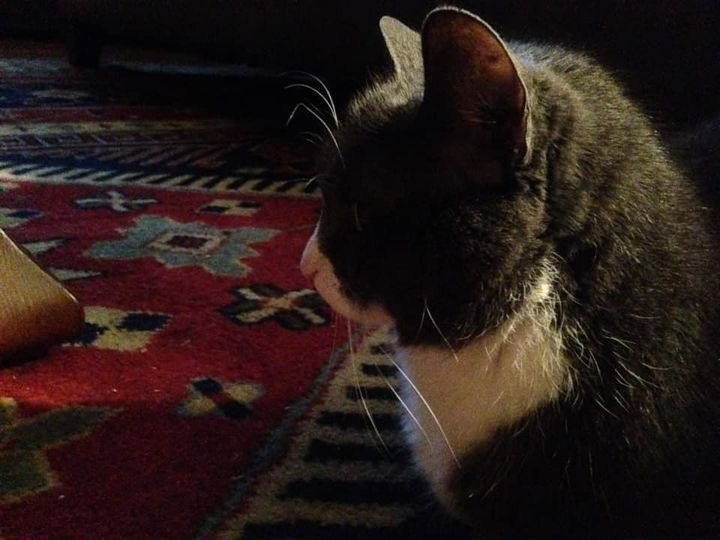 A beloved family kitten fights for her life

I was in my office and my 8-year-old daughter Josie was calling me—almost screaming—from the bottom of the stairs.   She ran up before I could stand up from my chair.

“Daddy!  Something’s wrong with Georgia!”  She was nearly in tears.

We hurried downstairs.  Georgia—the three-month-old kitten Josie had wanted since the day she could talk—was dragging her hind legs.

She was the newest member of the family and uniquely affectionate for a cat.  Seeing her struggle was heartbreaking.  I almost cried myself.

I grabbed the phone book and thumbed through Veterinarians.  I dialed the Horton Animal Hospital, described the symptoms, and with their instructions, Josie and I carefully raced Georgia to their emergency clinic on Paris Road.

It was June 23, 2005, and Horton veterinarian Michelle Marshall would diagnose a fatal illness few animal doctors will ever see.

Though Georgia didn’t seem to be in any pain, Dr. Marshall asked if anything had fallen on her.   Ruling out a fractured spinal cord, she was stumped.  She got a book from another room.  “Do you have any pesticides or weed killers Georgia could get into?” she asked.

My wife kept a bug spray for houseplants, but in a bottle high on a shelf.   Then Josie spoke up. “Georgia’s breathing funny,” she said.  We looked at the kitten, lying on a chair.

“Whatever it is, it’s progressing,” Dr. Marshall said.  We considered diseases—a cat version of polio, perhaps, or maybe a virus or germ.  She typed the symptoms into a search engine.  “You sure you don’t have any weed killers in the house?” she asked. “Nothing Georgia could get into?”

Arsenic? Good heavens, no!   Where on Earth could our cat…

I remembered something.  My daughter and I left the cat and raced home.  I ran upstairs. I looked down, and saw a springtime Missouri nuisance that came and went, little black grease ants, lined up from Georgia’s water bowl along the floor and under a narrow closet door.

I opened the door and peered in the darkness under the lowest shelf.   From back in the corner, I slipped out a small, black container from last year. Grants Kills Ants. But I couldn’t find a list of ingredients.  I ran to the phone.

By the time we returned, Dr. Marshall had found the culprit. The ant killer contained arsenic trioxide mixed with sugary bait.  The ants were enjoying a deadly snack, then covered with arsenic, a drink from Georgia’s water bowl.

Georgia’s prognosis was grim.   Arsenic doesn’t just kill ants; it’s among the deadliest poisons known to cats.   The smallest amount paralyzes the hind legs, then the lungs. Suffocation is a painful, terrible death, so our best course of action, Dr. Marshall advised, would be to make Georgia comfortable and put her to sleep.

When she understood what that meant, Josie cried like I had never seen.  Her anguish was pure and clear. She was asking for a miracle, in her eight-year-old way.  She was asking her daddy and Dr. Marshall to save her best friend’s life.

”I don’t think there’s anything we can do,” the animal doctor said.

And I agreed. I had read the same book standing beside her; I saw the same prognosis.  But Josie kept asking, and while I couldn’t answer, Dr. Marshall did.

She called around, conferred with fellow vets. Then she called the University of Missouri-Columbia Veterinary Medical Teaching Hospital on East Campus Dr.

She wanted to know if they could flush Georgia’s bloodstream with a chelating agent, a chemical that binds heavy metals like arsenic and sweeps them out.

They could try, they said.  It would be risky, and it wouldn’t be cheap—several hundred dollars—but they could try.  We would probably lose Georgia—her prognosis was grave—but they would try.

I didn’t think twice about it.  We raced Georgia—by this time breathing rapid and shallow—to the MU Vet center.   I didn’t even know there was such a thing; it sure is one amazing animal hospital.

They did tests to confirm arsenic toxicosis.   They flushed her system with something called acetylcysteine. They wrote in their notes what a sweet kitten “Georgia Martin” was.   Lots of students visited Georgia—for the first time ever, to observe arsenic poisoning in a cat.

All night, my daughter couldn’t sleep. My three-year-old son didn’t understand, but he couldn't sleep either. My wife Alison and I talked and worried.

It was noon the next day before the call finally came.

Oops! I’m trying to type and she just stepped on my keyboard.  Georgia Martin, that is.  She’s four years old now and loves to interrupt me.  She’ll crawl into my lap when I'm busy and gently rest her head, kneading my shirt with her paws.

That reminds me—to the four veterinarians who took a big chance for one small kitten and the little girl who loved her, thank you—thank you so much.

Georgia’s asleep now, but with every purring breath, I know she thanks you, too.