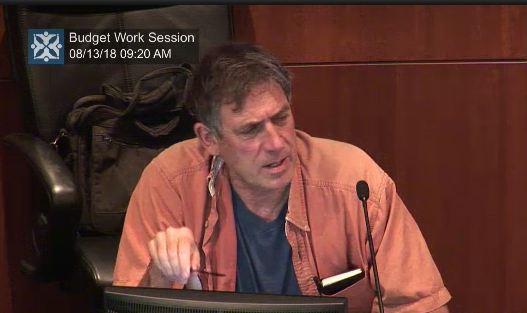 It's a bird, it's a plane, it's...!
COLUMBIA, Mo 10/15/18 (Op Ed) -- After more than a year of politicians and pundits trying to explain why Columbia City Hall has $328 million on deposit with the Union Bank of Switzerland (UBS,  latest figure), I  reviewed their ever-changing stories.

It's a checking account. No, it's a "rainy day" fund. No, it's inventory, like spools of copper wire used for power lines.

City Hall and its clueless allies have floated these explanations and a few more besides, all in some desperate attempt, it seems, to shut up this publication, angry taxpayers, residents fighting failing sewers, and city employee unions righteously pissed about low wages.  Their boss, city manager Mike Matthes, can't stop whining about "declining revenues" while misleading the City Council about sales tax receipts and other key financial indicators.

Meanwhile, a new group -- Performance Audit Support -- has announced plans to gather the 5,000 signatures necessary to force a reluctant City Council into hosting the Missouri State Auditor for a comprehensive look at the city's finances and practices.

We broke the story about the Swiss bank, aka "pooled cash" account a few years ago. It wasn't hard to figure out.  It isn't some big secret, but rather, two pages of tiny-print line items at the end of every Comprehensive Annual Financial Report, or CAFR, city government's annual accounting.

In 1998, the pooled cash account was around $110 million; twenty years later, $328 million. How many of you can say your cash on hand -- for whatever purpose -- has tripled in twenty years?

So why does City Hall have hundreds of millions of dollars on deposit with a Swiss bank?  It's a bird; it's a plane; no it's...

"The fund is a responsible accumulation of cash for a rainy day."  -- Trib columnist and former owner Hank Waters; Hank's View: Forget the City Audit, 8/19/2018

"This is essentially a single umbrella checking account, through which the City's several dozen different Departments process all of their financial transactions." -- 4th Ward City Councilman Ian Thomas, Ph.D.; The "Pooled Cash Account:" Filtering the Facts from Myth, 5/6/2018
(HOLD THE FRICKIN PHONE!  The Trib contradicts Councilman WrinkleBrain.  "The city calls the fund its 'pooled cash,' and the money in it is not used to pay bills, such as payroll or other operational expenses. The city maintains an operational account with U.S. Bank that is used to pay recurring bills."  The Public Purse: City maintains large reserve, but money is spoken for, Columbia Tribune, 5/15/18 )


"The pooled cash accounts include spools of copper and utility poles. Inventory is considered a cash equivalent because you can sell it and turn it into cash."  -- Columbia city manager Mike Matthes, Columbia City Council Budget Retreat, 5/19/2017. (This nutty explanation, for which Matthes' own finance director corrected him several times, starts at 1:13 in the video at this link.)
"The city’s Pooled Cash Account...is, quite simply, a component of the city’s business account." -- Trib columnist and self-appointed financial expert Chip Cooper, Put up or shut up about Columbia’s ‘Swiss Bank Account’, 5/4/2018
"The pooled cash account is not a savings account...The pooled cash account is far more analogous to a business checking account."  --  Chip Cooper a year earlier, Rumors of city's financial status overstated, 8/15/17

(But Coop old chum:  Aren't you contradicting your own paper, which reported the pooled cash account is NOT a checking account?  That it's NOT used to pay bills like a business checking account?  See above.)
"The so-called 'Swiss bank account' (formally named the 'Pooled Cash Account') contains the city’s reserve and funds not needed immediately such as the $10 million set aside for airport expansion.  The city finance department reports that about $3 million of the total is available for unrestricted, one-time expenditures." -- Chip Cooper for a THIRD TIME, Mayor's call for audit reeks of politics, 8/12/2018

Other than mention of the airport expansion in his rambling 4,000-word editorial -- the longest I've ever read in the Trib or any local newspaper -- Cooper never explains what in heaven's name City Hall is doing with the other $320 million!  And quoting the city's finance department?  Where the treasurer, internal auditor, and now finance director jobs are vacant?  Give me a break!

The one guy who has sought the truth about this finance fiasco, Mayor Brian Treece, said this to the Trib:
"Treece said he wants a detailed explanation of projects that rely on the money in the pooled cash account, whether they have been completed and for what price.
"'I've tried for more than two years to get that information,' he said. 'I want to ask questions on the cash reserves.'"

"Treece said he does not think he or the other members of the City Council have all the information they need about the pooled cash account and how the money is apportioned for projects."
-- The Public Purse: City maintains large reserve, but money is spoken for, Columbia Tribune, 5/15/18
Author Mike Martin served as chair of the City of Columbia Finance and Audit Advisory Commission.  He received an MBA from the University of Washington in Seattle, with a concentration in Entrepreneurship, which included extensive courses in accounting and finance. During a lifetime of self-employment, he has started, operated, and sold successful businesses in several different industries.

Given the nasty, mean-spirited attempts to silence questions about City Hall's finances -- which include ad hominem and personal attacks, calling out family members, threats, and name-calling -- Mr. Martin decided to dish a little back.