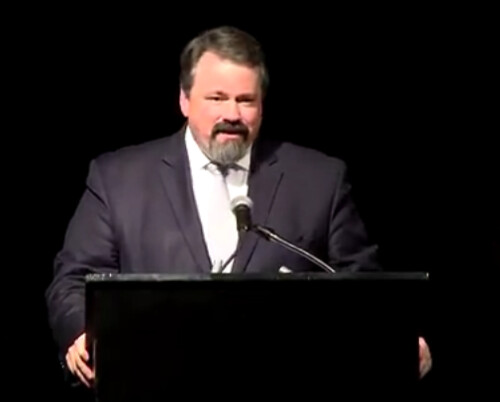 Attendees had angry words for Matthes, local media, and NAACP leaders they say allowed Matthes (photo, at podium) to go too far.

"I can report strong and disgusted reactions at our table," Theresa Solis Metz said on Facebook.  "A colleague did walk out during the city manager nonsense."

"The fact that he could...voice his racial stereotypes at a damn diversity breakfast...shows just how BLIND he is," added Susan Franck.  "It is ignorance combined with arrogance that manifests in policy citywide."
Matthes spoke about three city programs he claims have helped close an "employment gap" of about ten percentage points between black and white residents in Columbia.

To illustrate why he believes African-Americans experience higher-than-white unemployment, Matthes showed a photo montage of four young black men and a young black woman (below, right; click to enlarge).

"I’m going to be very honest," he told the audience of roughly 1,000 people.  "As a white man, these make me a little uncomfortable.  Right?"

Matthes then described each photo.
"In the upper left, he’s flashing a gang sign," Matthes said. "Guy in the middle looks like he’s gonna rob a bank.  Upper right:  I’m not sure which gender he or she is.  I’m befuddled.  Right?
"Lower left:  Why is he so angry?" Matthes continued.  "And the lower right: that’s totally inappropriate dress in a professional environment, or if you’re looking for a job."

The gender- and race-based remarks brought swift condemnation, in the audience and on social media. 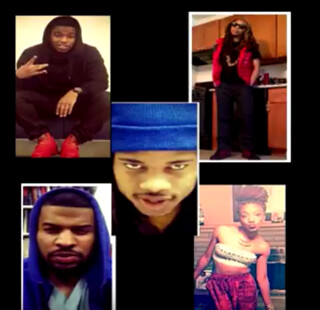 "When he showed the 'before' photos and said, to him, they looked like thugs, sluts, whatever -- I was appalled," Peggy Placier paraphrased Matthes on Facebook.  "Goes a long way to explain why he denies racial profiling — he does it!!!"


"There were gasps at our table and from tables around us," Sky Jimenez said. "At one point, a young white teacher at our table looked at her friend, a young African-American teacher and said, 'I am so sorry.'"
Matthes followed with a photo montage of the same five people,apparently dressed for work (below; click for larger pic).  "Here’s what they do for a living," Matthes said.  "Now, I’m not so uncomfortable anymore."

The first photos look like Millennial-generation Facebook selfies, typical of any ethnic group.  But Matthes suggested unemployment was behind them.

"What’s the difference between these two sets of pictures?  A job.  A job is the only difference," he explained.  "Funny thing about the guy that looked like he was gonna rob a bank:  He is a banker."

Matthes added advice he said he learned about how to get a job.  Since he was speaking about black unemployment, audience members found these remarks equally disparaging.  "You have to be on time.  That matters to your employer," Matthes said. "It’s best to have a bath, too.  Right?"

"I was flabbergasted after hearing that statement, being an African-American woman," said Suzanne Bagby, who said she later confronted "the Grand Dragon himself, Mike Matthes" at the Columbia Mall.  "I was at the diversity breakfast the other day and I wanted to let you know I was annoyed, insulted, and embarrassed," Bagby says she told him.   A Grand Dragon is a Ku Klux Klan leader. 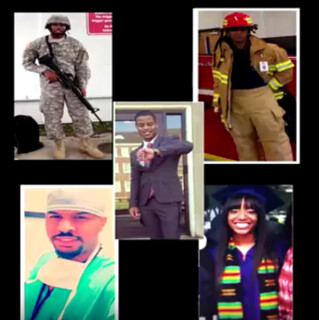 Others wondered why the media and racial justice groups either ignored or applauded the city manager's remarks.

"I’m willing to bet that neither local newspaper picked up on Matthes’ crude handling in his presentation," Traci Wilson-Kleekamp, a Race Matters, Friends organizer, explained on Facebook.  Our local press is not "sophisticated enough," she said, "to call out our leaders to do better!"
At least one NAACP leader stood to applaud Matthes' speech, Sky Jimenez explained.  "So sad that he was allowed to do this and that there were some who gave him a standing ovation, [NAACP leader] Mary Ratliff being one," Jimenez wrote.
"Some Black people drink the silly Koolaid too," Wilson-Kleekamp responded. "Some people so badly wanted to be recognized by the white folks that they will sell out their own people.  Even under the guise of the NAACP!"
Matthes concluded his presentation with a nod to City Hall. "This is why I love working for city government," he told the diversity breakfast crowd.  "We can be totally honest.  We’re not political.  We don’t have a platform we have to slavishly obey."