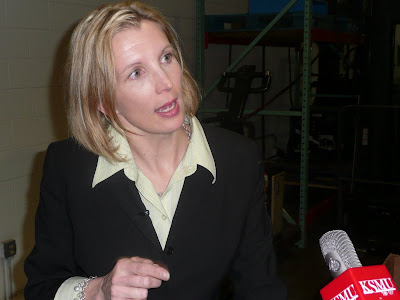 Hulshof's defenders are also angry about the snarky comments that followed the column, some hitting below the belt.

"Freed of worries about her husband’s future political prospects because of the 2008 rout by Jay Nixon, the wife of unsuccessful Republican gubernatorial nominee Kenny Hulshoff took to social media to vent," commentator Jerry Berger wrote in January, misspelling Hulshof's last name multiple times.  "Renee Hulshoff tantalized her more than 1,000 Facebook followers with this outburst:  'Quasi political post (albeit personal) – Four years ago on this VERY day, Kenny and I decided to run for Governor of the State of Missouri. The rest, shall we say, is history. . .that I shall someday write in a sordid tell-all book. With names.'"
Berger threw enough chum into the virtual waters to draw fighting words from an assortment of anonymous types. "I hosted this woman as a surrogate for her husband at a Republican luncheon during the campaign," wrote LT. "She was snotty and imperious."
"High maintenance is right," wrote "Baker." "I know Hulshof’s wife. She screeches to burst listener eardrums every morning as a local radio 'talent' in rural Missouri."

Apparently discovering the column this week, Renee Hulshof -- who is pleasantly upbeat and even self-deprecating on the air whenever this writer has listened to her show -- responded that "you should never read the comment section when you are featured in the article."
Her friends also fired back, on Facebook and on Berger's page.
"I have known Renee & Kenny a long time. This is a woman who loves and supports her husband 100%," Paula J. wrote. "She is the one who has to handle the family when he is away.  She becomes a single working parent while her husband is out trying to make this country or state better for those of us living in his district or state.  She is an intelligent woman with a passion for making our world a better place."
Friend Michelle concurred.  "Renee is a lovely woman who cares deeply about her family and her children and mostly her faith and her husband. Those who make blanket statements about someone that they don’t even know are just…well, sad.  Renee & Kenny are kindhearted, loving, humanitarian, giving, loyal and especially REAL!"