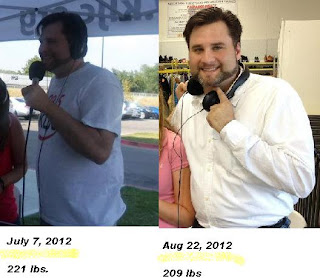 He helped make Liberty cool as the voice of The Eagle 93.9.  Now, Mike Ferguson pens a wake-up call from the heart .
COLUMBIA, 8/25/12 (Beat Byte) -- At the top of his Facebook timeline, Mike Ferguson has a telling reminder.
It's an EKG of the normal heart beat Ferguson did not have on July 27th, when what he politely calls a "cardiac event" almost killed him.

His story is an important wake up call, especially for men approaching middle age who otherwise look and feel fine.

"'You are lucky.' A nurse said that to me very matter-of-factly," Ferguson -- a Libertarian talk show host at Columbia's KSSZ radio from 2010 to this summer -- writes in a blog chronicling his comeback from a heart attack.

Just 40 years old, and "in better shape than most guys my age," Ferguson had returned to the Kansas City area to take jobs as program director for KLJC radio and news director for Missouri News Horizon.

"I was even ready to start Shaun T's Insanity home fitness program," he writes.
Then, out of nowhere, the Big One hit.  "I took my car in for an oil change and then walked over to a fast food place. Suddenly, I wasn't feeling well...Tightness, pain, dry throat, discomfort in the upper chest. Crank that up by 10. That's what I felt for a few minutes."
"Waves of pain shot through my chest and, at times, my shoulders.   I managed to get my car, pop a couple aspirin and drive home. By then, it felt like a red-hot vice was squeezing my chest and pain was shooting down my left arm at times.  It was hard to breathe."

After his brother took Ferguson to the E.R., he got the incredible news: "At the ripe old age of 40, I was having a serious heart attack."

The nurse's comment about being "lucky" didn't come lightly.  "There was a 100% blockage of one of my heart's arteries.  And another blockage -- 90% -- was still happening."

Stents in his chest and arteries re-opened, the cardiac event left Ferguson so exhausted he could "barely walk to the bathroom.  I'm amazed at how quickly I get winded and how physically weak I am."
Coupled with the exhaustion was how senseless it all seemed.  "I've never been a smoker and have a history of being

an athlete," he writes. "But a bad family history on my dad's side of the family is what trumped when it came to my health.  Lousy genes, basically, won out."
To make sense of it, Ferguson is looking to God, "who has a reason for things like this.  I don't know what it is, but He left me here to accomplish something still."

Family, friends, and church have all come forward to help, and "the doctor says I should, eventually, make a full recovery if I'm smart about my next several months."
Being smart has meant dropping weight, and instead of lifting weights, doing "lots of cardio," Ferguson writes. "I am eating better."  From high-sodium frozen foods, "I've switched to fresh and frozen veggies and I'm now - ugh - cooking the meats myself, and am trading out pastas for brown rice or baked potatoes."
Of course, frustrations remain. "I've been shocked, repeatedly, at how tired I get," Ferguson writes. "The doctors and nurses keep telling me I can make a 'full recovery', but right now I feel like that's light years away."

But, as he was when he debated candidates on local radio, held national leaders accountable for boneheaded blunders, or opined about the importance of liberty in society, Ferguson is philosophical.
"Because of this heart attack, I've been reminded of just how blessed I am," he writes. "I'm still eyeing that Insanity workout."