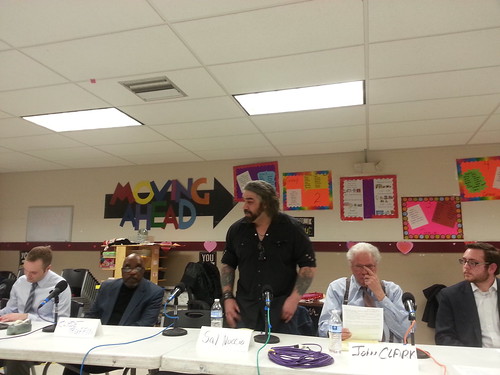 COLUMBIA, Mo 02/14/15 (Beat Byte) -- "Brat castles," Sal Nuccio said he calls Columbia's only real growth industry, student apartments.   "I call 'em that because they look like castles and they're filled with brats."

Big, imposing men who would be more than a mouthful for the sharks circling City Hall, Clark and Nuccio made the same point repeatedly:  They won't take the bullshit city manager Mike Matthes, Mayor Bob McDavid, and the Town Bosses have been dishing, all-you-can-eat buffet style -- from lying about downtown infrastructure to bullying dissenters.

They also know real life in the First Ward, Nuccio as a downtown business owner for 17 years, and Clark as an advocate "fighting for First Ward residents and stakeholders for over 20 years," he told the audience of over 60 people. 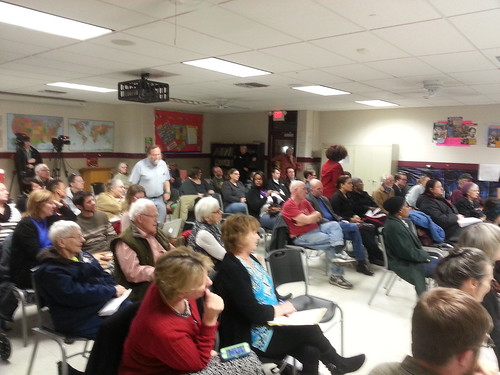 With the exception of the Rev. Clyde Ruffin in a strong third-place showing, the other candidates -- an otherwise impressive group -- didn't know nearly enough about the Ward, city policy, or the City Hall chicanery that has loaded the community with sketchy taxpayer-supported enterprises like IBM, the failed dinner train, and the St. Charles Road Development Gang.

Reading audience questions on index cards, moderator Dan Cullimore asked if candidates would support a Chronic Nuisance Abatement Ordinance for slum housing and criminal activity on rental property.  Nuccio said, "Yes, because you can't just do whatever you want" if your doings adversely affect your neighbors.

But only Clark knew that such an ordinance already exists and is not enforced.  "I helped write it," he explained.  "And the City Council gutted it."  True, that. 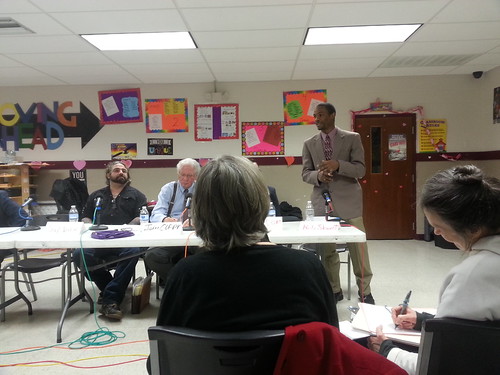 Nate Brown, the Reynolds Journalism Institute public relations director, seemed the least informed of all.  A Columbia native, he returned home in 2013 from Washington, DC "to finish my journalism degree."  He was a great communicator without much to communicate.

With a Blight-sized bulls eye painted on it by developers and policy makers eager to replace old houses, black people, and low income renters with more "brats", the First Ward can't afford to elect a Council rep who will be learning on the campaign trail -- or on the job.

Most of the candidates made an important distinction about the hot button issue of "growth."  Growth can be good or bad, depending on how it's managed, they said.

"It has to be managed for the benefit of everyone," Ruffin explained.  "I'm in favor of development, but not at the expense of the existing community.  You can't neglect what you already have."

"I thought more of our downtown growth would be adults," said Nuccio, who owns Eastside Tavern on Broadway.  "Instead, it's just a bunch of rich kids and we have to clean up their messes." 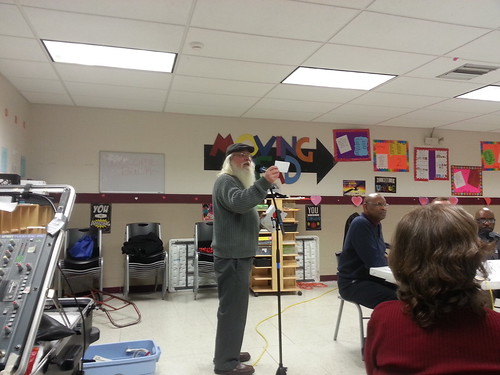 I brought up the "magnum opus of brat castles," the controversial Opus student apartments, asking if -- given such broad public opposition -- the candidates would have supported extending Columbia's publicly-owned utilities to the 300-unit building.

"I would have voted against building it, and would vote to stop building it now," Rasmussen said.

"I would have questioned how the construction would impact existing infrastructure," Nuccio said.  "That needed to be answered."

"It's difficult to answer because I was not in the room when Opus was being discussed," Ruffin said.  "Based on what I did see, it was an unfair arrangement."

"The city manager bypassed normal procedures" to push Opus through, Clark explained.  "City staff made a sweetheart deal with the developers, with no parameters set by the Council.  I want to restrict the ability of city staff to negotiate these sweetheart deals, and rely more on outside expertise to evaluate projects like Opus." 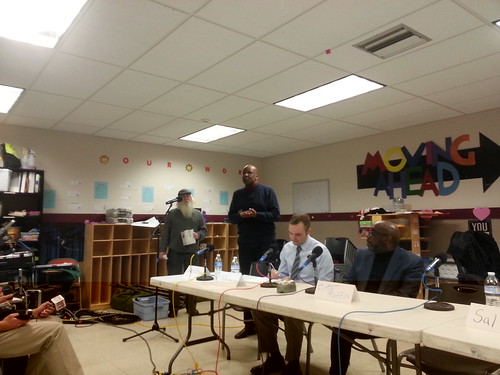 On the hot button topics that forced out predecessor Ginny Chadwick, the candidates came down as follows:

Repeal Tobacco 21, which increased the legal age to buy tobacco and e-cigarettes from 18 to 21.

Rasmussen:  Either repeal it or put it to a vote.
Ruffin:   Non-committal
Nuccio:   Repeal it
Clark:  Keep it.
Loft:  Repeal it.  "Government needs to get out of the prohibition business."
Stewart:  Non-committal
Brown:   Keep it.  "What I saw was a textbook example of how NOT to oppose a public health law.  The Council has spoken." 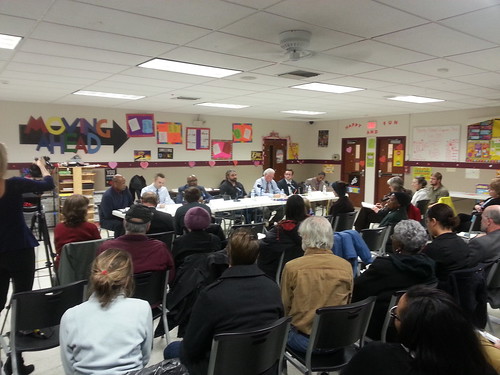 
Will you stand up to the Mayor and city manager, and not let them bully you?