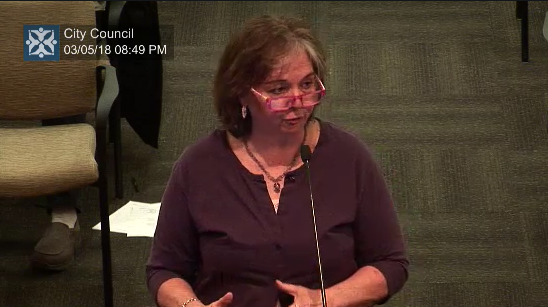 Economy, efficiency, and effectiveness
COLUMBIA, Mo 7/2/18 (Beat Byte) -- A City of Columbia Finance and Audit Committee member had some tough words and eye-opening remarks for the City Council about the need for a State audit of City Hall.

"Yes.  Absolutely I do," Maria Oropallo told Councilwoman Betsy Peters, who asked if Oropallo thought a state audit "was a good idea."
"This is my fourth year on the city's Finance and Audit Committee, and I can't tell you much about the city's finances," said Oropallo.  "I wish I could.  But I can't."
Performance audit vs internal audit

Known as a "performance audit," the State Auditor's work differs significantly from the "internal audit" City Hall performs each year that Oropallo and fellow committee members later review and present to the City Council.

The internal audit is "not extensive," Oropallo said, emphasizing she was speaking for herself and not the Committee.  "It's a good exercise, but I wouldn't put much weight behind it.  A performance audit looks at things a lot differently, in much more detail."
The State Auditor would examine "the economy, efficiency, and effectiveness" with which the city carries out its responsibilities,  with the "aim of making improvements," Oropallo explained.  A state performance audit would ask how much value taxpayers and ratepayers are getting for their money.  Are Columbia residents getting the "right quality and quantity at the right time and place for the lowest possible cost?"  Is city government achieving "optimal output of services with available resources?"
Internal auditing, on the other hand, assesses "compliance and risk management," Oropallo said.  "It attempts to answer the question:  Is the city reporting its financial life in accordance with the highest standards of GAAP?  It does NOT express any opinion about the effectiveness of the city's internal controls."
"Not comprehensive"
Kansas City and St. Louis-based RSM US -- private certified public accountants -- is in its seventh year performing the city's internal audit, which "does not look at everything. It's not comprehensive by any stretch of the imagination," Oropallo told the Council at the March hearing.   Instead of examining A thru Z, the city's hired accountants "look at A, C, F, and M."

This year, for instance, they examined accounts over $750,000.  "But what about the ones that are $699,000?" Oropallo asked.  "It has to rise to a level of concern before it gets looked at."
Finance and Audit Committee members never see the full internal audit, either.  "We get a summary," Oropallo told Mayor Brian Treece, after he asked how much her committee actually reviewed.  "We get a very nice presentation and a nine-page report that tells us we didn't break any laws. I don't know how that can be considered a full reporting."
"Routine and boilerplate"
Not only is the city's internal audit incomplete, but "it feels routine and boilerplate," Oropallo said.  "And it shouldn't be routine."  Every city in the country receives virtually the same wording from its internal auditors, she noted.

Part of the RSM US routine has surprised Oropallo.  "I was shocked to find out that the same person signs off on the audit every single time," Oropallo said.  "I want a different set of eyes looking at this.  I want someone else to say, 'Well, what does that mean?' And 'where is this going?'  But that's not how they do it."

Oropallo was so concerned with the "same eyes every time" practice that "I raised the issue with our committee and expressed a grievance," she told the Council.  "We don't get to ask anything of the auditors."

Council members are presently debating the need for a state audit.  Second Ward Councilman Mike Trapp and Fifth Ward Councilman Matt Pitzer have publicly and repeatedly objected to its estimated $750,000 to $1 million cost.