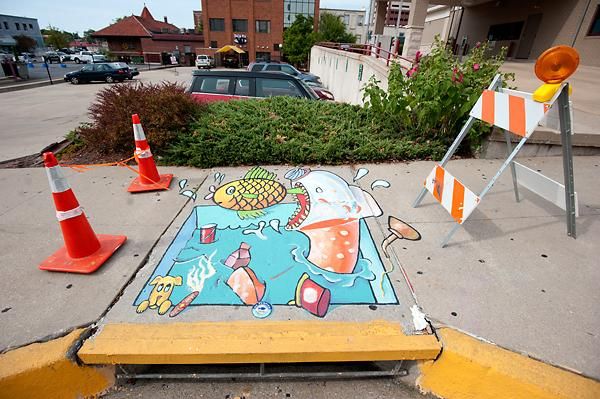 Why should artists work for free?
COLUMBIA, 8/24/12 (Op Ed) -- City government needs to pay its artists and stop acting like a struggling charity.
Columbia's clever traffic box art concept has come to storm drains all around town (left), as artists have decorated the drains for a City Hall education initiative about how storm water pollutants travel to local streams.

Instead, nine artists donated their work under a hot sun at a time when people everywhere need paying jobs, and City Hall is preaching the "jobs, jobs, jobs" mantra at every turn.

The volunteer arts army has left me wondering:   Since when did City Hall -- with a $400 million budget and over $1 billion in assets -- don an eye patch and a tin cup?  City government is not a charity; it is not a non-profit funded through the good graces of generous donors.

It is, rather, a big-budget behemoth that just doubled its chief's severance pay and never saw a six-figure consultant it didn't want to hire.

Garagezilla Junior (at Short Street) is how many millions over budget?

City Hall expanded into an over-budget, $30 million addition a few years ago.

And last I checked, city staffers get salaries for the work they do.

City Hall does not let citizens use its assets for free.   We pay taxes and fees.   And we constantly hear how city infrastructure needs more of our money.

City services are not charity and City Hall can well afford to pay its artists!

And should pay, regardless whether the artists offer to donate their work.

Rather than taking a freebie from a group that often struggles financially -- while continually being hit up for freebies -- a much better message to the public is, "Though these community minded artists offered to do the work for free, we insisted on paying them.  That's how much City Hall values the arts -- and our artists -- here in Columbia."

Projects like storm drain and traffic box art are well worth taxpayer dollars.

They bring a unique sense of community identity to a place; they educate; and they make pedestrians aware of potential hazards like storm drains.   The drains are already painted yellow to caution people on foot, so these larger murals not only add art, but boldly reinforce the "be cautious as you walk" message.

The murals are also a nice welcome for SEC fans.

If we value the work enough to do it with the best artists in town, we should value it enough to pay for it.   That's the type of argument we always hear when it comes to muckety mucks like city manager Mike Matthes, and that's the argument we need to start hearing when other people contribute, too.