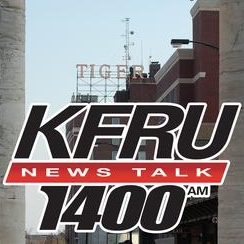 "Elected by a small group of sycophants"

Germond owns the Columbia Business Times and with partners Dave Baugher, John Ott, sold the KFRU group of radio stations to Cumulus Media for $38.75 million.  With partner Renea Sapp, the same group received a multi-million TIF from the city to redevelop the Tiger Hotel.

The radio trio's on-air animus toward Fourth Ward Councilman Ian Thomas lit up after a caller mentioned a tense discussion between Thomas and KFRU Morning Meeting co-host Renee Hulshof.  Hulshof had challenged Thomas about long-running infrastructure project delays in her central Columbia neighborhood, claiming voters had set aside money to get the job done years ago.  Thomas disagreed.
"I remember Ian Thomas calling us 'common voters' and saying he knew better than we did," the caller told Germond and his co-hosts.
"How can Ian Thomas think he can snow the voters, think that he is better and smarter than us?" Germond asked.  "I mean, the guy's educated, he has a Ph.D. He's the son-in-law of a former mayor. He's from England."
An email list Thomas maintains may give him a false sense of confidence, Germond suggested. "He has this 2,500-person list of some sort.  Facebook, Twitter -- I'm not on that stuff. But he has this list and it's just a bunch of sycophants," Germond said.  "His cheering section. Just a bunch of cheerleaders."

Thomas uses a 4th Ward constituent email list for polling and pontificating.
Roper called Thomas' list a "bunch of disciples."  Before major Council decisions, Thomas "polls the people on his email list and of course,  he gets the results he wants," Roper said, specifically referring to the MidwayUSA/Henderson Branch sewer extension.

Another caller accused city government of "fascist, liberal, communist" practices that have prompted him to sell his real estate holdings after lifetime city residency and "lots of investment."   He also lambasted Thomas as "that guy from England. Maybe they should check IDs or something."

The conversation turned to the Council's attitude toward growth, with Roper insisting their vote against the MidwayUSA sewer was "anti-growth and anti-gun. There are a lot of people who don't like that they make firearms accessories out there."

The anti-growth theme carried over to Third Ward Councilman Karl Skala and First Ward Councilman Clyde Ruffin, both of whom voted against the sewer extension.
Skala's earlier vote against the Landmark Hospital on Old Highway 63 "is one of the stupider things that Councilman has done," Germond said.

And when Ruffin voted against the CVS pharmacy on the corner of Providence and Broadway, "he didn't disappoint," Germond continued.  With Ruffin's Henderson Branch no-vote, "This particular person has another notch in the totem for opposing things for no particular reason whatsoever," Germond added.

"They're elected by a small group of sycophants," Germond told his audience. "The sixteen or seventeen percent of people who bother to vote."