A "myth" used to raise taxes

Year after year,  district officials and School Board politicians shut out union negotiators; say NO to teacher pay increases; and refuse to thaw salaries frozen years ago.

"Columbia Public Schools needs an additional $10.26 million from taxpayers to...provide a top-notch education for youngsters,"  Chief Academic Officer Sally Beth Lyon said way back in 2008.   "The No. 1 thing tied to achievement is quality of teachers."

Instead of teacher pay rising since then, CPS has built pricey elementary schools; an $80 million high school; and paid millions in infrastructure bills for developers angling to get in on the land rush around the new schools.

District officials and School Board members also treated themselves to a new $7.8 million admin "headquarters".

Any money left over goes into savings accounts worth $164 million dollars.

"It's kind of a myth that we're only running a levy and bond issue so teachers can get paid more," Columbia NEA president Susan McClintic said during voter tax hike push in 2012.   "That's not going to happen."

Yet the "we need to pay teachers more" rhetoric never stops.   Here's a year-by-year collection of it.   Click the links for the sources.

Why do we need a tax levy increase now?   On average, an increase is needed every five to six years to maintain programs and competitive staff salaries.   How were the reserves spent?  Almost 70 percent went directly to current staff salaries and benefits.  By adding $1,000 to the base of the salary schedule and then operating that schedule, $6.8 million in reserves were allocated directly to teacher and staff salaries. -- Phyllis Chase, Superintendent

I encourage a "yes" vote to approve the levy.   Teachers salaries must be competitive.   Columbia teacher salaries have been at or near the bottom relative to comparable districts.
-- Chuck Headley, former School Board member

Columbia Public Schools is asking for our permission to raise property taxes 54 cents to increase teacher salaries.  The increase will pay to hire the best teachers.
-- Marty Siddall, general manager, KOMU-TV; chairman of the board of the Columbia Chamber of Commerce

Your property taxes for schools likely will increase this year.    Teachers said the extra cash should boost teacher morale after two years of going without compensation for additional experience.

Superintendent Chris Belcher said it will require asking voters for a tax levy increase in April 2012.   “What it takes to be the best means...teacher benefits…that are so good we continue to attract the best teachers,” Belcher said.

Making salaries more competitive is a goal of Columbia's comprehensive improvement plan, and Superintendent Chris Belcher said he would like to see the district at least be in the top half of its peer group.

Columbia School Board member Christine King...also has said teacher salaries are not competitive in Columbia.   "The goal is to educate children.  To do so, we need highly qualified staff.....We have to have a competitive salary schedule." 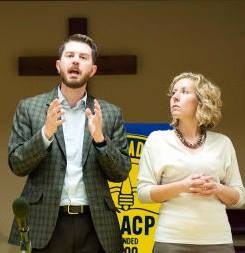 Columbia School Board member Helen Wade said she was "well aware" teachers in Columbia aren't paid as well as they should be or as well as teachers in other districts....Fellow incumbent Jonathan Sessions reiterated Wade's point.  (At voter forum, right)

Columbia School Superintendent Peter Stiepleman said it was meant to “take the temperature” in the district.   Regarding the quality of the school district, top issues among parents and school staff members were quality teachers and staff; a nurturing, supportive culture in the school; and small class sizes.

The levy increase is needed because Columbia schools are of high quality and are growing, but salaries for teachers and other workers are lagging.   If we like living in Columbia and the vicinity, we should enthusiastically vote “Yes” on April 5. -- Hank Waters, Columbia Daily Tribune