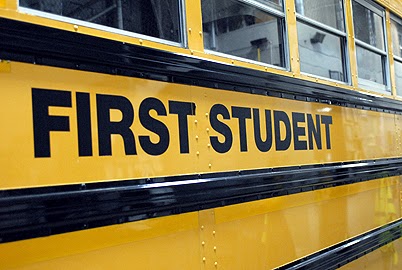 Getting kids to sit with a practice used to shake tailgaters

*Please see addition appended below.
COLUMBIA, Mo 3/28/14 (Beat Byte) -- A Columbia woman has filed a complaint with the Boone County Sheriff over a disciplinary tactic aboard a First Student school bus she says injured her daughter.

The driver routinely hits the brakes, sending students still standing onto the floor or into a seat, the complaint alleges.  Called "brake checking," the practice is often used to shake tailgaters.

First Student is the contract bus driver for Columbia Public Schools (CPS), which has schools in both the city and county.
The complaint marks the third safety-related incident in two months involving First Student drivers for CPS.   Columbia police arrested David Gilspie in February on an outstanding traffic warrant after he ran a red light while driving a school bus.   A second bus driver was arrested and suspended for allegedly hitting an elementary school student earlier this month.

"There really needs to be better training on how to manage behavior with children," said the complainant, who asked that her identity and her daughter's identity be withheld.

During interviews about the bus driver with "a random sampling of kids who ride the bus, the vast majority confirmed she would routinely do 'brake checks' when kids were standing up," Boone County Sheriff deputy James Perkins explained in an email to the complainant.   "I was able to talk with the bus driver by phone.  Of course, she denied ever doing a 'brake check' while driving the bus."
Perkins told the complainant he forwarded his report to the "Prosecuting Attorney's office, requesting they issue an arrest warrant for the bus driver."   That office declined to release information about the investigation to the Heart Beat, and no charges have yet been filed.

A medical exam, meanwhile, confirmed the girl sustained a shoulder injury.
"I want to send you heartfelt thanks from our family," the complainant emailed Perkins.  "Our hope for the outcome from all of this is that First Student and CPS will adjust their training to address these types of abuses."
Deputy Perkins and First Student did not respond to requests for comment.

*The Heart Beat received this email from Deputy Perkins this afternoon:
"Sorry this is late.  I was not working the day you sent this. I have forwarded the report to the Prosecuting Attorney's office with a recommendation for charges, but no warrant has been issued yet that I know of."