Warning students to "stay away" from residence hall windows, Head Tweeted he was "working with" the MU police department, Missouri state troopers, and the National Guard after a "confirmed" sighting of the KKK.

"I am sorry about the misinformation I shared on social media," Head Tweeted later.  "I received and shared information from multiple incorrect sources, which I deeply regret."

Head "is at the center of a movement that brought down the president of the University of Missouri," CBS News reported Monday, about student protests that led Tim Wolfe to resign. 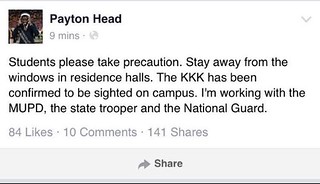 "Hours where students were honestly terrified for their lives.  Unacceptable," Conor Montgomery Tweeted.   "You have accomplished a lot.  But tonight, I was disappointed in your leadership."

"The boy who cried Wolfe," Richard Ryan responded, with a play on Wolfe's name.   "Time to step down."

Head made national headlines after posting on another social media site -- Facebook -- about recurrent encounters with N-word shouters.

"I just want to say how extremely hurt and disappointed I am," Head explained in September.   "Last night as I walking through campus, some guys riding on the back of a pickup truck decided that it would be okay to continuously scream NIGGER at me."

A keynote speaker at this Fall's Mizzou Black Studies Department, Head approached the difficult subject with grace and humor, joking he was lucky his antagonists didn't know he was gay.

"I take complete blame and fault for my actions," Head wrote, in a second apologetic Tweet last night.

"At the bare minimum, I respect you stepping up and taking responsibility," Montgomery replied.