A "not-so-rich" newspaper with a $1.2 million payroll and stylish downtown digs

COLUMBIA, 2/27/13 (Op Ed) -- A public plea for help from a Columbia Missourian columnist calls into question a troubling labor policy at the Missouri School of Journalism.
The Missourian's  22 employees make a combined $1,245,843 annually according to 2011-12 public payroll records (the most recent available).
But a few years ago, Missourian weekly columnist David Rosman told Columbia Heart Beat readers he was paid nothing.
The newspaper's editor in chief, Tom Warhover, confirmed.  "We pay a grand total of $0 to David," he said.
This month, Rosman -- writing for the Missourian since 2007 -- published a plea for healthcare financial assistance on GiveForward, a fundraising website.  He distributed it on Facebook, noting that public speaking is part of his livelihood.
"Imagine giving a lecture or speech, being interviewed or just seeing friends with few or no teeth," the GiveForward pitch says.

"That is exactly what David is looking forward to if he does not have corrective dental procedures within the next six to twelve months.   We cannot afford the dental work and there appear to be no public or private organizations that provide assistance for reconstructive dental procedures.  David has been out of work for a while now."

But Rosman has not been out of work.  He's written hundreds of weekly Missourian columns for nearly six years, as much output as many staff newspaper columnists, with consistency editors covet.  The Missourian charges for print and online editions, and builds advertising around its content, so Rosman's work also helps pay its bills, including that $1.2 million payroll and upkeep on one of Columbia's newest downtown buildings: the Missourian's home, Lee Hills Hall.
Of five regular columnists, however, only retired journalism professor George Kennedy receives a paycheck, online payroll records indicate.
After Rosman explained his unpaid status in 2008, this writer complained to Warhover.   Low pay is an industry-wide scourge in journalism, I noted.   No pay is beyond the pale, especially at the world's premiere journalism school.
What kind of modeling, I asked, i

s the J-school providing students who must find paying work to eat -- and retire college debt? How can you expect professional standards -- like not plagiarizing -- if you treat your writers like amateurs?
"We operate at a very hefty loss, in fact, one that the provost has made clear can't be tolerated much longer," Warhover explained.  "Almost no local content is paid for."  Warhover added he would "bring up the matter" at a future meeting of editors and administrators.
Fast forward to 2013.   I emailed journalism school dean Dean Mills.  Rosman's predicament "flabbergasted" me, I said.
"I realize you could terminate Dave and find someone else to write for free because that's what our screwed-up labor market will bear," I explained.  "But that's the same argument journalists routinely decry in debates about the minimum wage, migrant labor, the export of jobs overseas, and so forth.   We can't advocate market-driven labor in our industry while refusing the same for other industries.  That's hypocrisy, and it's only compounded at the world's flagship school of journalism."

If someone is doing what they love, Mills argued (while misinterpreting my case), they don't have to be paid.
"One could argue, as you do, that all contributors to a newspaper should be paid, just as one could argue that all musicians, actors and singers should be paid," Mills replied Feb. 16.  "One can also argue that venues should be provided for those who want to write or perform for the love of doing it.  Community bands, choruses and theaters and not-so-rich newspapers tend to favor the second argument." 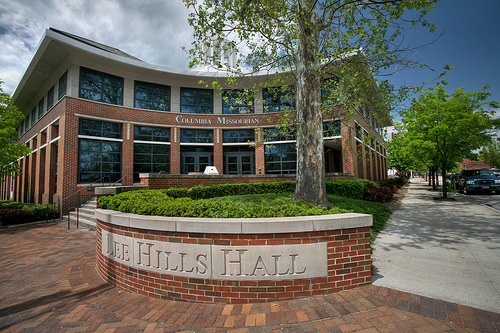 To characterize the Missourian as "not so rich" or financially struggling is laughable.   With the mega-bucks Reynolds Journalism Institute, teaching students the news biz is big business at Mizzou.
Housed in stylish Hills Hall, the newspaper pays an average $54,167 annually to its 22 staff and faculty. The journalism school has a much larger payroll -- 188 employees -- with over 20 people making more than $100,000 per year.
Among Missourian and J-School administrators, Mills commands a whopping $206,623.92 according to 2011-12 payroll records; Warhover brings home $107,092.56.   Hourly staffers make up to $21.41/hour.  George Kennedy receives $28,266 annually, presumably in addition to retirement pay.
Four years ago, Kennedy got wind of my complaint to Warhover and told me to butt out.  "Mike must not have enough to do," he said.  Rosman -- who did not respond to questions about the policy -- and the other unpaid columnists didn't feel cheated, Kennedy explained, so "why is it anybody else's business?"
But what about the person working for less than the minimum wage who doesn't feel cheated?  Why is that the business of minimum wage laws?  What about the person whose employer doesn't provide health insurance?  If she doesn't feel cheated, why should the employer be forced to provide insurance?
It's all about fairness, pu

blic officials -- and many journalists -- argue:  People have a right to a minimum wage.  We have a right to basic healthcare.
This writer argues that at public institutions like Mizzou, taxpayers have a right to know if their money is -- or is not -- spent according to generally accepted principles of fairness.
Rosman told the Heart Beat that though he would like to be paid, he has become an "important and influential voice" in local and state politics.   Writing about those issues with the newspaper's other unpaid columnists fulfills his "patriotic duty."
"Tom Warhover and I have had the pay conversation several times," he explained.  "I will continue to accept Tom’s offers of doubling my current salary when requested."

The offer, of course, is facetious:  doubling zero is still zero.


"I don’t have a bucket list, but if I did, writing for a city newspaper would be near the top," he explained.  "Getting paid would be better, but for now, I am a volunteer honing my skills."

Unless an employer is a charity, however, the U.S. Fair Labor Standards Act (FLSA) prohibits unpaid volunteering outside certain circumstances.   The law has even redefined what it means to be an unpaid company intern.
A six-part FLSA test determines whether or not an employee should be paid at least minimum wage and associated taxes.  If the employer derives an immediate benefit from the activities of the worker or exercises control over the labor (like an editor, for instance) it must pay for the work.
To regulators like the Department of Labor and IRS, "if it walks like a duck and quacks like a duck, it's a duck."   A weekly columnist for 6 years is not just "honing his skills," but walking and quacking like a full-fledged employee.
Other arguments aside, it's unfortunate when large public institutions take advantage of people working to better the community.   I've made the same complaint about City Hall not paying local artists for their work, and it's not just my bleeding heart opinion that something is wrong.   Read the five-part test here, entitled "How a writer knows if he or she is being ripped off."
"David does not wish to be toothless," his fundraising site explains. "Toothless does not look good."
Neither do public officials -- and journalists -- who refuse to practice the fairness they preach.